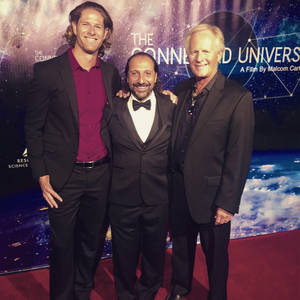 Trevor Gamble, Nassim Haramein and Foster Gamble
at the premiere of The Connected Universe in Los Angeles
Leslie, Rob

The CONNECTED UNIVERSE, from Producer Malcolm Carter, explores new understandings in science that reveal a bigger picture of interconnection than some have ever imagined. This eye-opening film explores how the fundamental experience of being human is also about connection… and how this experience may be altered by these breakthroughs in science.

Nassim Haramein is one of the great visionary scientists of our time. He is parting the veils of mystery at a similar level to Buckminster Fuller, Arthur Young, Walter Russell, Max Planck and Albert Einstein. I don’t say this casually. It comes from almost 20 years of watching, learning from and working with this amazing and courageous man.

Nassim dropped out of high school when he realized that he wasn’t being shown common sense and coherent answers to the big questions that drove him. He had had extraterrestrial contact and inter-dimensional guidance for years that showed him a far more penetrating, accurate and useful reality than what his teachers were portraying.

He acted on his inner guidance and set out to create his own education. He would earn money as a world-class skier, climber and mountain guide in Canada, and then get in his van, collect various books and papers, visit with selected mentors and then go to the desert for weeks or months of study and meditation.

This challenging quest came to fruition in the late 1990s and he chose to bring the work to the world, despite the obvious risks of challenging scientific paradigms — as was experienced by such luminaries as Socrates (poisoned), Bruno (burned at the stake), and Copernicus (died under house arrest).

Haramein was ridiculed by the academic community for suggesting things such as that there was a black hole centering every galaxy. Now official measurements of the 40 closest galaxies have confirmed his prediction.

His notion that there was a fundamental, double-toroidal energy pattern that sustained systems at every scale of the known universe has now been thoroughly explicated in his brilliant series of scientific papers starting with a new scaling law for the universe and running through his most recent work that accurately predicted the mass of the proton and the electron. This work can be read from the Resonance Project website.

I had the privilege to work with Nassim for about five years prior to making THRIVE. My own work in living geometry and cosmology gave me the privilege of understanding and validating his breakthrough thinking before most others were prepared to recognize it. We worked together on both the theoretical and practical device invention levels and, of course, he featured prominently in the THRIVE film.

It is with great pleasure that we are announcing to our network that this film, THE CONNECTED UNIVERSE, is now available on Vimeo. Get some popcorn, prepared to be awed, set aside an evening with some dear ones and WATCH THIS FILM!

For those who find they hunger for more of the understandings represented in the film, and how to apply them in your own lives, please check out The Resonance Academy, where you can participate in courses that break it down and show how it all fits together. Nassim Haramein himself is a frequent mentor in these participatory, on-line webinars.

Fasten your seat-belt and Enjoy!